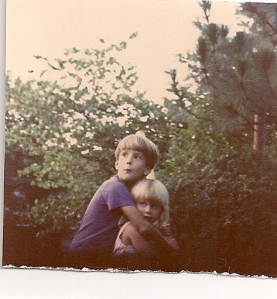 Case-in-Point #1 – We were running late for gymnastics. I put everyone in the Volkswagen Vanagon and asked child #2 to strap #3 in her seat-belt and off we went. It was summer and the local university had very low cost gymnastic classes for ages 4 through 10. Our four children were 4 to 9 at that time and it was great to take them all to the same place at the same time. We pulled up to the gym and the children piled out. As the older three climbed out of the van, I reached back to help our youngest and realized she had absolutely nothing on but a slip that the girls wore for dress-up! I saw she had no underwear on because the slip was see-through. Since her sister had strapped on her seat-belt, I really hadn’t noticed her lack of clothes. I took the three older children into the gym, asked my friend Carol to keep an eye on them during the class, and I rushed #4 home to dress her. What kind of mother takes her children out barely dressed? Bad Mamma.

Case -in-Point #2 – Once I met a mother of a classmate of our son at the library and we began talking. Our daughters were friends and this mother said that since our daughters like to get together, it would be nice if  our sons could get together as well. I said “Sure” without checking with our son and made a plan for all four to get together on a Saturday. When I mentioned this to our son – he was not pleased. He had other plans for that Saturday and it did not involve going to this boy’s house. Since I had already made a commitment to the mom, I MADE our son follow through and go. What kind of a mother manufactures friendships for her child? Bad Mamma!

Case -in-Point #3 – I was outside in the spring, working in the garden and had #3 (5 months old)  in a playpen to keep her safe. #1 (almost 4)  was hitting walnuts with his plastic baseball bat. #2 was crawling around right next to me while I weeded. Suddenly, a car stopped on the road right above our garden. I looked up to wave at whoever had stopped and I saw an elderly man walk to the front of his car and reach down to pick something up. He picked up my daughter! She had crawled up the bank and onto the road! I raced up the bank in horror and took my little girl from the man’s arms while sobbing in relief  that she was safe. The man said ” You better keep an eye on her” which I have always felt was very gracious under the circumstances.  What kind of mother would allow her 18 month old to wander off onto a road? Bad Mamma!

I’m sure most of us mothers and grandmothers can tell about situations that demonstrate our failures and shortcomings as mothers. There are incidents we are not proud of, lapses in judgement or focus. The only redeeming quality in the above situations is God’s grace which was manifested in my weakness. I am not perfect as a mother. I need God’s redeeming love and grace to cover my mistakes.

The Bible shares the lives of mothers who made errors in judgement. Rebekah chose to love one of her twin sons, Jacob,  over the other son, Esau, with far reaching consequences. Salome, mother of  James and John asked Jesus to seat one of her sons on His left and one on His right in His kingdom. Jesus gently rebuked her. Reading about these mothers and others who fall short of God’s glory illustrate the fact that we all have sinned and need redemption. As mothers we need God’s grace and forgiveness.

But Jesus bent down and started to write on the ground with his finger. 7 When they kept on questioning him, he straightened up and said to them, “Let any one of you who is without sin be the first to throw a stone at her.” 8 Again he stooped down and wrote on the ground.

9 At this, those who heard began to go away one at a time, the older ones first, until only Jesus was left, with the woman still standing there. 10 Jesus straightened up and asked her, “Woman, where are they? Has no one condemned you?”

“Then neither do I condemn you,” Jesus declared. “Go now and leave your life of sin.”

This is the wonderful truth of the Gospel.  Jesus is speaking to a woman caught in sin, yet His response is “…neither do I condemn you, go now and leave your life of sin.” When we are convicted by the Holy Spirit about something in our life, maybe our failings as a mother, we must ask forgiveness and leave behind that destructive pattern of behavior. There is no condemnation to those who are in Christ Jesus once we accept forgiveness.  So, no more “Bad Mamma!”

Cousins playing at Nana and Pop's

I just returned last night from seeing six of our grandchildren. As always, it warms my heart and I am smiling now just thinking about it.  It was SO cute to see the 2-year-old cousins – one boy, one girl – play together. They are quite a pair! As is common with children their age they are WIDE OPEN. They started by “cooking” , wearing aprons and bringing me samples to “taste.”  They soon moved to jumping on the bed, throwing stuffed animals, and went on to performing with a play microphone. They were not concerned with “girls play” or “boys play” ….they just want to play. It is refreshing to see children play with abandon and joy. They aren’t bothered with “gender appropriate play” if there is such a thing. Children only become aware of such issues when adults express their concerns.

It bothered me so much when our children were small and some well-meaning person would say to our daughters “Do you have a boyfriend? ” or “Who is your boyfriend?”  If the answer was “no” (as it should be with young children) it might seem to the child that there was a deficiency, that she should have a boyfriend. Family members may even pick someone out for a child’s special attention and manufacture a relationship that a small child is not ready for, nor does he/she want. We tried to emphasize being friends. That meant that we encouraged our children’s relationships with other children regardless of that child’s sex. We tried to minimize singling out a friend as a “boyfriend”, “girlfriend” or “best friend” ( BFF now?) instead focusing on being FRIENDS. When one child is designated a “best friend” that instantly demotes all other friends to a lesser role. Encouraging healthy friendships is an important responsibility of parents.

15 I no longer call you servants, because a servant does not know his master’s business. Instead, I have called you friends, for everything that I learned from my Father I have made known to you.
Jesus said these words which define one aspect of our relationship with Him in a term we should understand and share with our children. Below are some very brief but important elements of a true friend.

Encouraging healthy friendships that incorporate the above traits will allow our children to develop lifelong skills that will not only be a blessing, but will also emulate Christ. When one of our daughters was planning her wedding, we talked about who (besides her BEAUTIFUL sisters) she wanted in her wedding as bridesmaids. “Well, Jonathan and David are the closest friends I have had for the longest time.”

Well, those young men would not have looked so good in the bridesmaid dresses, but they did look very nice in suits as ushers! The fact was, they had been dear friends since childhood and being in each other’s weddings reflected that relationship. Their friendship has evolved to include all their spouses, though now they are separated by distance.

Friends enrich our lives in so many ways and helping our children to value true friendship is a wonderful legacy to pass on.

“The greatest gift a mother and father can give their children is to love their spouse.” I remember hearing that said by a wise, godly man, Jay Fesperman. We were attending a Christian Marriage and Parenting Retreat at the Inn of the Last Resort in Franklin, North Carolina. That phrase struck a chord with me because I had lived in just such a home growing up. It truly was a gift!

When I was seven or eight years old, I remember my mother crying one day after an argument with my father. When dad left the kitchen, I went up to mom and hugged her and said, “Dad is mean to you!” Through her tears her said, “No, Gayle, your Dad is right, I was wrong.” That sent a strong message to me about my mother’s respect for my father. Even when her feelings were hurt, she wanted me to know that my father was worthy of respect. Because of her love and respect for my father, I learned to respect my father and his authority in my life.  I knew he wasn’t perfect, but through the way my mother talked about and to my father, I also learned to love and respect my father’s authority in my life.

If my mother had put down my dad and spoken with resentment about him, that would have planted seeds of disrespect in my heart. It could have grown into distrust of my father’s love and concern for me.

31 “For this reason a man will leave his father and mother and be united to his wife, and the two will become one flesh.” 32 This is a profound mystery—but I am talking about Christ and the church.
33 However, each one of you also must love his wife as he loves himself, and the wife must respect her husband.
Notice that these verses call the marriage relationship not only a mystery, but a PROFOUND mystery. That is a understatement from my experience! It is a mystery to me how my relationship with my husband influences my children’s sense of security and value – yet I know from personal experience  – it does. I have been blessed my whole life with a realization that God loves me. This is not a prideful assessment, but a deep felt realization that my Heavenly Father loves me. I attribute this to the blessing of having a birth father who loved me unconditionally and loved my mother faithfully as well. It was an easy transference of love and commitment from my father to God, my Heavenly Father.
The challenge for me is to demonstrate the legacy of respect for my husband that my parents gave to me. I hope to pass this legacy on to the next generation. That is the BEST gift ever!