“How did you and Phil ever get together?”

We just celebrated our 40th wedding anniversary, and the answer is still the same –

We could be the poster couple for “opposites attract.” Just ask any of our friends, or our children for that matter. Phil and I are very different. That has created definite excitement in our marriage. May I use excitement to describe these extremes?

These are just a few examples of the contrast between Phil and myself.

Contrast as a principle of design is defined as “the juxtaposition of different elements of design in order to highlight their differences and create visual interest.” Differences create visual interest because things don’t all look just the same. Contrast creates excitement in art work. Light and dark elements of a painting create drama, just as neutral values that are all the same seem dull or uninteresting.

Jay Fesperman, a very wise and Godly man shared at a marriage retreat – “If both people in a marriage always agree, one is unnecessary”.

We do NOT have that problem! We often don’t agree. Yet how do we prevent the contrast of our relationship from plummeting into the depths of hurtful conflict?

What has allowed us to stay together and resolve our contrasting viewpoints low these 40 years?

“31 For this reason a man shall leave his father and his mother and shall be joined [and be faithfully devoted] to his wife, and the two shall become one flesh. 32 This mystery [of two becoming one] is great; but I am speaking with reference to [the relationship of] Christ and the church. 33 However, each man among you [without exception] is to love his wife as his very own self [with behavior worthy of respect and esteem, always seeking the best for her with an attitude of loving kindness], and the wife [must see to it] that she respects and delights in her husband [that she notices him and prefers him and treats him with loving concern, treasuring him, honoring him, and holding him dear].

This says it all.

Phil and I do not live up to this standard – yet this is what we come back to when the contrast in our relationship threatens to tear us apart.

I am humbly thankful for our marriage, because as imperfect as it is, we are committed to walking out the next 40 years together – with God’s help.

God had a plan when He brought us together. 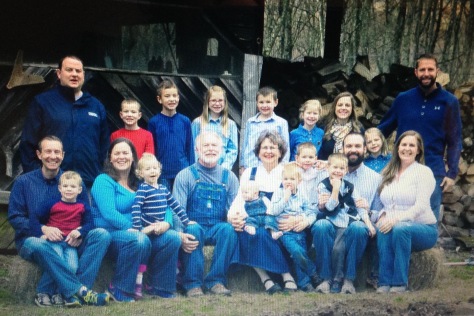 Families are suffering in Charleston, South Carolina – they are our brothers and sisters in Christ – therefore we are suffering.

I couldn’t help think of the children of the pastor whose father is now no longer with them. It is Father’s Day, a tragic reminder of all they have lost. Others murdered were also fathers.

They were at church praying, just where many thousands of Christians throughout our country are on Wednesday night – praying. It hurt so much to think of this evil act being carried out in a place where God is worshipped and His love is shared.

I was reading yesterday in a journal my Grandmother Barker, my father’s mother kept. After a tragedy occurred during Woodrow Wilson’s presidency, Grandma quoted him as asking that these verses be read to him.  II Corinthians 4: 6-9 (NKJV)

6 For it is the God who commanded light to shine out of darkness, who has shone in our hearts to give the light of the knowledge of the glory of God in the face of Jesus Christ.

7 But we have this treasure in earthen vessels, that the excellence of the power may be of God and not of us.

8 We are hard-pressed on every side, yet not crushed;

we are perplexed, but not in despair;

9  persecuted, but not forsaken;

struck down, but not destroyed;

I have heard many of the family members and friends of those murdered speak of forgiveness in this time of horrific pain and loss. What a testimony of God’s amazing grace!

As the Body of Christ we MUST step up our efforts to battle the forces of evil that foster hatred.

It starts in our homes as we express acceptance and love for all people, especially those who may be different from us. Hatred is a learned attitude. When our homes are places of love and acceptance – our children will learn to treat others with respect.

Sing this simple, yet profound chorus with your children and talk about what it means –

ALL the children of the world

They are precious in His sight

Jesus loves the little children of the world.”

Hatred can not exist in our hearts if God’s love is present. Now is the time to plant those seeds of love and respect in the hearts of our children and grandchildren.

We must keep those suffering in Charleston in our prayers.

We are all suffering – but love wins in the end.

“Unforgiveness is like drinking poison and hoping the other person dies.”

I have been thinking about forgiveness lately since a friend from many years ago recently called my husband and asked if they could get together.

They did – and this person proceeded to ask forgiveness for something that happened almost 20 years ago. He wanted freedom from the guilt of what he had done. God had put on his heart that he had hurt my husband by some things he had done.

I have been thinking about forgiveness lately because I need it daily from my loved ones.

It is easiest to hurt those we love the most and who are closest to us.

Why is that? There are many reasons but those that come instantly to mind are:

* they are there – near us
* they are those we talk to the most
* it is easy to get busy and forget those who are most important to us
* we are self centered, sinful creatures

Jesus came to bring us forgiveness. His death on the cross took all our sin – from the most egregious deed to a jealous thought – Jesus paid the price for ALL sin.

Yet we must redeem it – just as we turn in a coupon for 40% off – we must ASK for forgiveness.

A coupon is no good if we don’t redeem it.

Forgiveness is no good if we don’t redeem it.

So, we must ask forgiveness, even if we don’t feel sorry. Forgiveness is an action – not a feeling.

Poison drains away life and kills.

Unforgiveness drains away life and kills. It fills us with bitterness and rots away our bones.

30 A calm and undisturbed mind and heart are the life and health of the body, but envy, jealousy, and wrath are like rottenness of the bones.

When we fail to forgive someone – it really hurts us.

The person we are angry with or hurt by may not even know we harbor unforgiveness.

The opening quote was shared by a survivor of child sexual abuse and it was a statement her pastor spoke during a sermon. She shared that at that moment she realized she had to forgive the perpetrator of the abuse. After she forgave him, he no longer had any hold on her life. She was able to let go of the anger, resentment, and hurt.

Forgiveness does NOT justify what one person has done that hurts another. Forgiveness loosens the hold of sin and its effects on one’s life.

14 For if you forgive people their trespasses [their reckless and willful sins, leaving them, letting them go, and giving up resentment], your heavenly Father will also forgive you.

15 But if you do not forgive others their trespasses [their reckless and willful sins, leaving them, letting them go, and giving up resentment], neither will your Father forgive you your trespasses.

May we walk in the freedom of forgiveness each and every day.