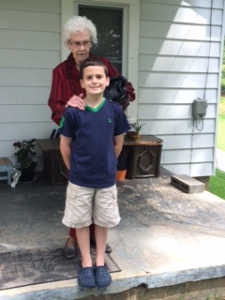 “She’s the top of the family tree”

What a wonderful description of a lovely great-grandmother! Caleb is 10 years old and has learned the importance of valuing his elders. Caleb is the grandson of my friend, Alice Marie. She recently took Caleb to see her mother and Alice Marie told me how patient Caleb was in waiting as “Nana” walked carefully everywhere they went. He opened the door for her and held her hand as she got herself completely out of the car and steady. Alice Marie took the following pictures and I thought how well they show respect for our elders. 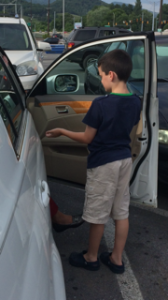 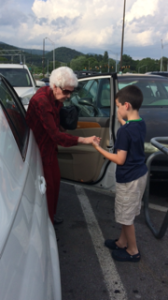 This is something we must make the effort to instill in our children and grandchildren – respect for their elders. Our culture does not celebrate aging. In fact, our culture tends to worship youth, with aging something to avoid, hide, surgically alter, even lie about. There is absolutely nothing wrong with staying physically fit, looking our best at whatever age, and practicing good health habits. Yet aging is part of living – the alternative is…not living!

Some practical ways to teach our children respect for their elders are:

The greatest influence will be our personal behavior. Yet we should also ask our children and grandchildren “How can we make Great-grandma feel welcome?” “What do you think Great-grandpa would like to do?” Children are very insightful and will be more engaged in doing things if it is their idea.

In the Bible Paul gives advice to Timothy who he is mentoring as a follower of Christ. Paul tells Timothy to treat people certain ways according to their age and gender.

Do not rebuke an older man harshly, but exhort him as if he were your father. Treat younger men as brothers, 2 older women as mothers, and younger women as sisters, with absolute purity. 3 Give proper recognition to those widows who are really in need. 4 But if a widow has children or grandchildren, these should learn first of all to put their religion into practice by caring for their own family and so repaying their parents and grandparents, for this is pleasing to God.

The BEST reason for teaching children to show respect for their elders is that it pleases God.

Alice Marie told Caleb how proud she was of they way he treated his great-grandmother.

“Well,” said Caleb “She is the

Center of our Family,

Top of the Family Tree,

The one who gets us all together.”

May we please God by honoring our elders.

I have spent the past two weeks floating – figuratively and actually. We were able to fulfill a lifelong dream of mine to visit Sweden, the home of my maternal grandmother. I was floating in a dream come true that ended up exceeding my expectations. We also visited other counties bordering the Baltic Sea which was the actual floating bit, moving from one port to the next.

We had been planning and saving for this trip for a long time. Phil did almost all the work of making reservations, flight plans, and tours of the various cities. The past several years our vacations have included major league baseball games. This year – it was art museums, palaces, and cathedrals. Phil did a great job. Everything went smoothly except that his suitcase didn’t arrive until the 3rd day, which was fine because he doesn’t mind wearing the same shirt over again!

Like planning any big event – a wedding, a family reunion, an anniversary celebration – it takes some hard work and careful planning to carry it off. Even then, the unexpected often happens. That is when it is best to float – just go with the current. We can’t change the unexpected circumstances – but we can choose our response.

There is a good example of this challenge, let’s call it the “floating challenge” in the Bible. In Genesis God tells Noah to build an ark to save himself and his family from the judgement that God was going to shower on mankind. Get it – “shower”?

Back to Genesis, God tells Noah to build an ark and he gives Noah very specific instructions. So, Noah and his sons become the laughing-stock of their community because they dedicate themselves to building a very large boat – on dry land. They ignore the trash talk and stay focused on their goal – building the ark. The rains come and Noah and his family are ready. They had made preparations according to God’s directions and the ark held Noah and his family and lots of animals. (more that just two of some species – see Genesis 7:2)

They float for about 10 months. You can imagine that it takes quite a while for the water to recede and the ground to dry out enough for all to leave the ark.

8 But God remembered Noah and all the wild animals and the livestock that were with him in the ark, and he sent a wind over the earth, and the waters receded. 2 Now the springs of the deep and the floodgates of the heavens had been closed, and the rain had stopped falling from the sky. 3 The water receded steadily from the earth. At the end of the hundred and fifty days the water had gone down, 4 and on the seventeenth day of the seventh month the ark came to rest on the mountains of Ararat. 5 The waters continued to recede until the tenth month, and on the first day of the tenth month the tops of the mountains became visible.

But that is not all – you can read the rest of the waiting period in the verses that follow in Genesis 8.

But nothing is said about floating. That is the time they had to wait and trust until God showed them what was next. That was the floating challenge.

That is so much like parenting, isn’t it? We plan, prepare, train, teach, feed and cloth our children. We do our best to instill strong moral character and Godly principles in their lives. Yet after all the preparations, the “floating” comes. The time when we must wait and trust God with the outcome.

There doesn’t appear to be any navigational system on the ark. Noah had to believe that it would float where it should. Or more accurately, that where the ark floated was exactly where God wanted it to float. In the end, God had it covered. He is faithful.

That is the faith I need to have in God. Faith that God will use my attempts to follow His plan for parenting. Then in the times of floating, the times when I have no control, God will once again prove Himself faithful.

Some floating may be calm.

Some floating may be on rough seas, even tempests.

Do I believe that God is in control of the floating?