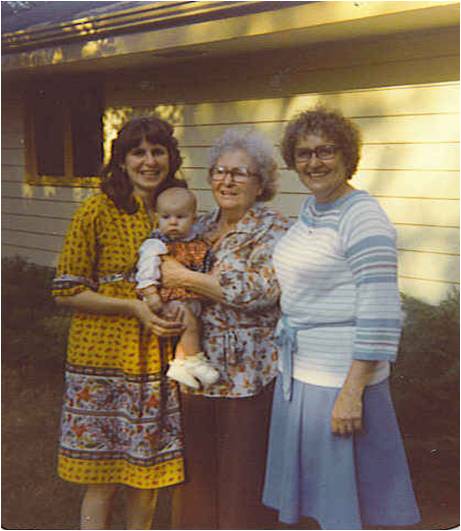 I heard several stories this week on the radio that gave me pause. One was an interview on “Fresh Air” and another was on “All Things Considered”. In light of Mother’s Day there were several stories on “Morning Edition” that focused on the changing roles of women in society. Each of these stories covered the issues that women face in current culture, exploring efforts of women to “have it all” – by overcoming the “barriers to success in the workplace”, AND have a satisfying and meaningful family life.

The first question that arose in my mind was “What is “it“? Certainly in our diverse and puralistic society these commentators are not suggesting that “it” is the same for all of us, are they? While listening to these viewpoints it seemed that the prevailing attitude was that many women don’t reach their goals or dreams because their responsibilites to their families hold them back. Small children prevent them from becoming the CEO because they can’t leave an ill child at day care and therefore they miss the important board meeting insuring being passed over for a promotion. Is a promotion guaranteed if one doesn’t have children? I think not.

But the question remains… can a woman “have it all”? That depends on what “it” is.

So, I asked myself… do I have it all? Did my mother?….did my Grandmother?….do my daughters?

I look at the above picture and see women who have had it all. Yet, not all at once, nor in the same way. Here is a picture of four generations of women who have lived their dreams because being a mother was a focal point of those dreams.

My grandmother emigrated from Sweden in 1920. She came to Chicago via Ellis Island with one suitcase. Her dream was to raise a family as an American citizen. She first worked as a maid, then a cook for a wealthy Chicago family. After meeting my grandfather, she married, had three daughters, raised two grandsons, eventually living in a lovely brick colonial home in a northern suburb of Chicago. She began oil painting when she was 55 and she continued painting until she was 90. Her greatest joy came from her relationship with God through Jesus Christ. She loved to quote Bible verses – sometimes out of context – and share the fact that Jesus loves each individual, regardless of who they are.

At the end of her life, she felt she had it all. She had lived the American dream and was going to spend eternity with her Lord and Savior.

My mother grew up in a Christian home with two loving parents. She married her college sweetheart before finishing her degree and soon had three children. She stayed home raising them, eventually getting an Associates Degree in Library Science when her children were in college. Together with another family they ran a family campground in the Smoky Mountains of North Carolina in the summer for 22 years. After my father retired from teaching high school Biology, my parents went to teach at a mission school in Taiwan. This had been a dream of my mother’s since childhood – to serve in a foreign county. They lived and worked in Taiwan for 7 years returning to care for aging parents. My mother has participated in and taught women’s Bible studies for over 60 years and she and my father have continued to do this in their 80’s.

My mother will be 85 on Friday and she will tell you she has had it all. Not all at once, but she has lived her dreams and experienced things she didn’t dare to dream.

These women have lived purposeful, meaningful lives. They have not been paid seven figure salaries. They have not had books written about them (yet) nor gone viral on YouTube (thankfully!).
They don’t run large corporations or manage hundreds of employees.
But they sure could make small children sit up and listen!

34 But they kept quiet because on the way they had argued about who was the greatest.

35 Sitting down, Jesus called the Twelve and said, “Anyone who wants to be first must be the very last, and the servant of all.”

The point our culture misses is that the path to true greatness is servanthood.

When we are serving our families as mothers and wives we are being obedient to a high calling. Jesus Himself placed children front and center as we see in verse 37.

Some women are called to places of authority – some are not. Having it all for daughters of our Heavenly Father means serving one another whether we are the CEO or the one who changes diapers.

Next week – Part II – Having it All… But Not All at Once.