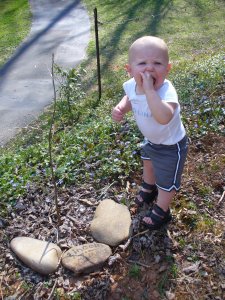 What is he eating?!

If you were in a bookstore or library and saw a book titled Imperfect Parenting by Paul Apostle would you buy it or check it out? Most of us would ignore such a book – the title alone lacks enticement – no matter who wrote it. When we look for advice or guidance about something, we want positive, encouraging information, even if we sense that something doesn’t ring true. Why would I want to learn to be an imperfect parent?

The truth is that just as we are imperfect individuals, we are also imperfect as parents. That is not to say that we are “off the hook”, or that we can’t improve our performance as parents.

I enjoy hearing the stories behind the athletes that recently participated in the Olympics. It is especially inspiring to hear about those who have overcome daunting obstacles to achieve the goal of representing their country in the Olympics. Some were told they would never “amount to anything”; some were singled out for glory when they were very young and have had to “live up to” burdensome expectations. One common thread thoughout these stories, is that along the way someone believed in them. No athlete at that level makes it on their own. Most of these elite athletes had outstanding coaches, mentors, teammates, siblings, and often parents who encouraged, challenged, and pushed when needed. Many of these athletes reached a point where they felt like giving up, yet someone stepped in to inspire them to press on to reach their goal.

12 Not that I have already obtained all this, or have already arrived at my goal, but I press on to take hold of that for which Christ Jesus took hold of me. 13 Brothers and sisters, I do not consider myself yet to have taken hold of it. But one thing I do: Forgetting what is behind and straining toward what is ahead, 14 I press on toward the goal to win the prize for which God has called me heavenward in Christ Jesus.

Paul inspires us to “forget what is behind”. That means to forget our mistakes from the past – don’t wallow in the despair of past shortcomings and failures. “Strain toward what is ahead” – press on by doing the things that make us better parents.

Each of us has our own areas in which to “press on”. By God’s grace we will come closer to being the parent we should be – still imperfect – but closer to our goal.